Printing was never monolithic as a technology. Over the course of its history, it has been employed in the service of producing everything from nimble playing cards designed to last for months to hulking tomes destined for millennia of consultation. And within the ever shifting universe of print, books have routinely been perceived as too available or unavailable, too large or small, too cheap or luxurious. This pendulum of concerns, inflected by transformations in the media landscape, have informed every scenario for a bookish end game from the era of newsprint to that of digital ink. The book has ended time and again and, on every such occasion, it has given birth to new kinds of books.

Among the developments in contemporary publishing that continue to engage my interest is the notion of digital era books that double down on their analog physicality, that merge the horizons of archival research with those of design and physical making in ways that tap into and renew some of the richest veins of 20th century experimentation in book design.

My latest publication, which has just come out with Rizzoli in both English and Italian editions, is a case in point. Entitled FuturPiaggio – Six Italian Lessons on Mobility and Modern Life, it’s a collaboration with my long-time Milanese designer friend, Daniele Ledda of XYcomm, and involved many people, from the archivists at the Piaggio Museum to my graduate students to the top leadership of the Piaggio organization.

The book assumes the form of an extended essay on modernity and mobility, modeled after Italo Calvino’s Six Memos for the Next Millennium, recapitulating the 130 history of the Piaggio Group with an eye towards its future development. In so doing, it reprises two moments of Italian excellence in the field of book design: Fortunato Depero’s bolted Depero futurista 1913-1926, (printed in 1927), the artist’s words-in-freedom anthology of his career as a Futurist, a replica of the bolted technical manuals found in period Italian machine shops, and the 1970s libri rossi [red books] in which Olivetti codified its design processes, with their French-fold pages, under- and over-printing, and ghostly layering effects.

Here you see the cover with its massive bolts that are laser incised: 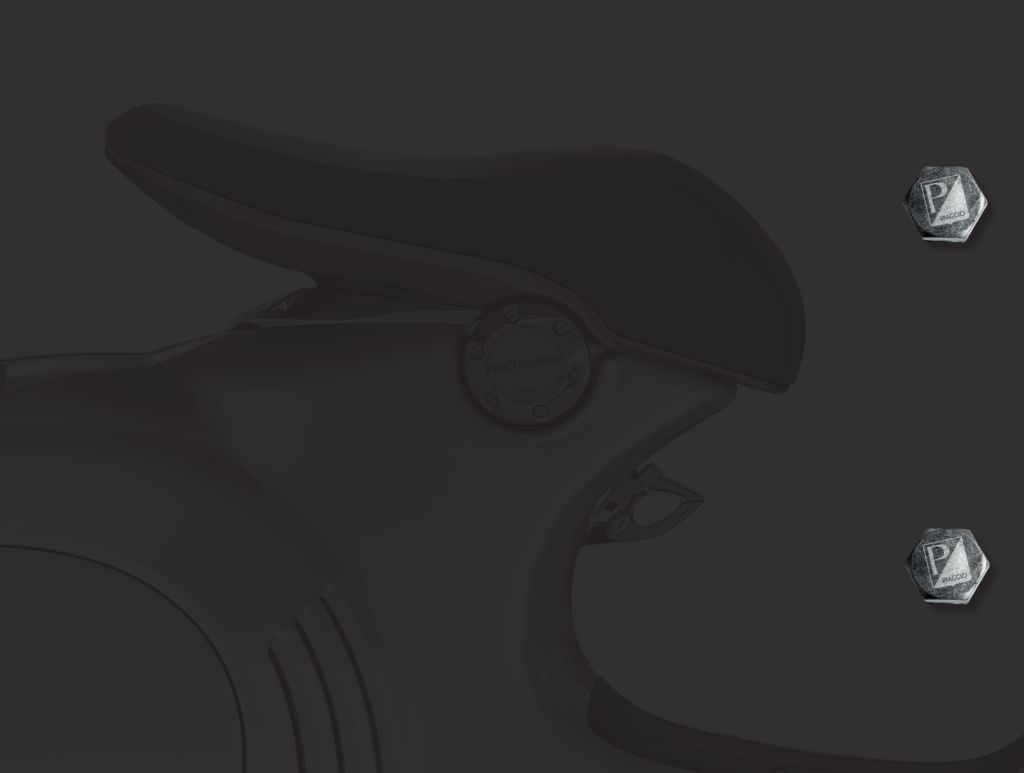 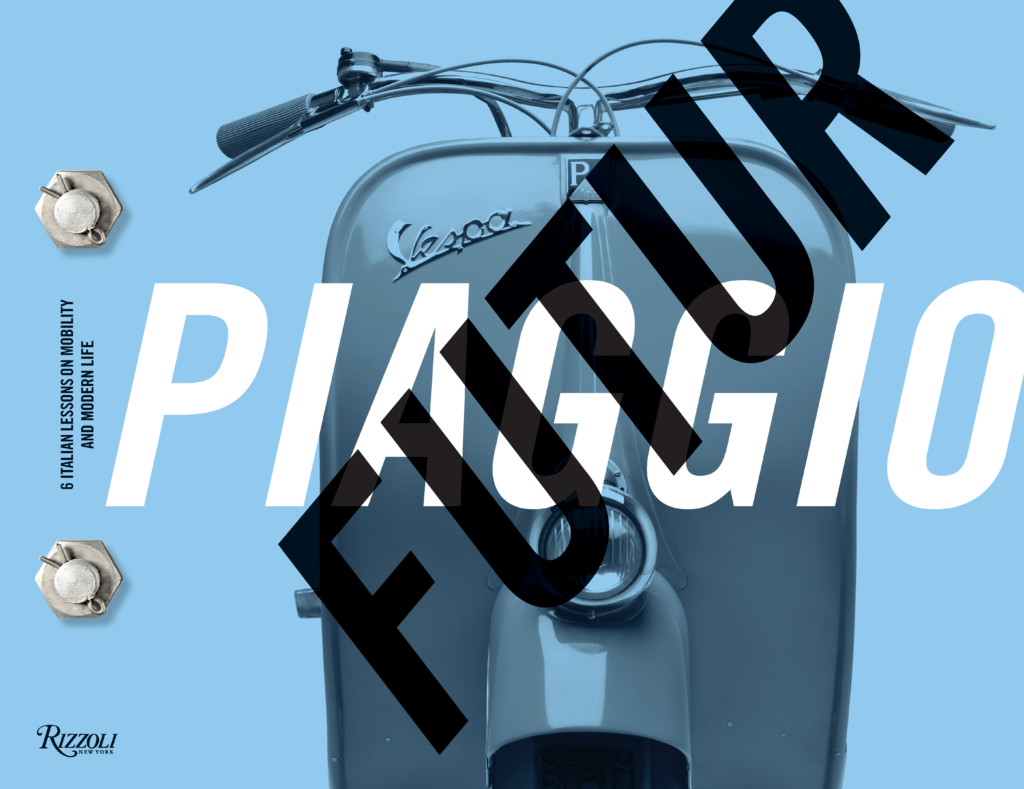 The book comes in a beautiful black box. The first 100 copies include a replica of the original 1946 patent for the Vespa scooter. Below you will find a few sample page layouts (but to fully appreciate the physical elegance and tactile force of FuturPiaggio you will have to sit yourself down in front of a physical copy).

The chapter headings for the essay appear as follows:

Here below you will find reproduced one of twenty micro-histories from the “Snapshots” section which reconstruct the histories of everything from Vespa wheels and Vespa clubs to the high-speed adventures of “Jojo la Moto” (George Monneret). Its theme is the historical evolution of the Piaggio logo. 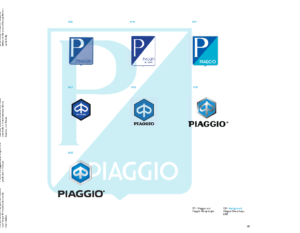 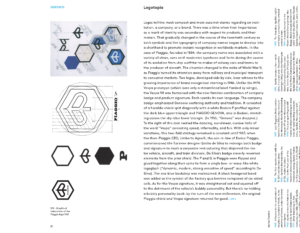 The cover of the dictionary section is reflected in other section headings (like that for Snapshots and the so-called “Anthropologies”): 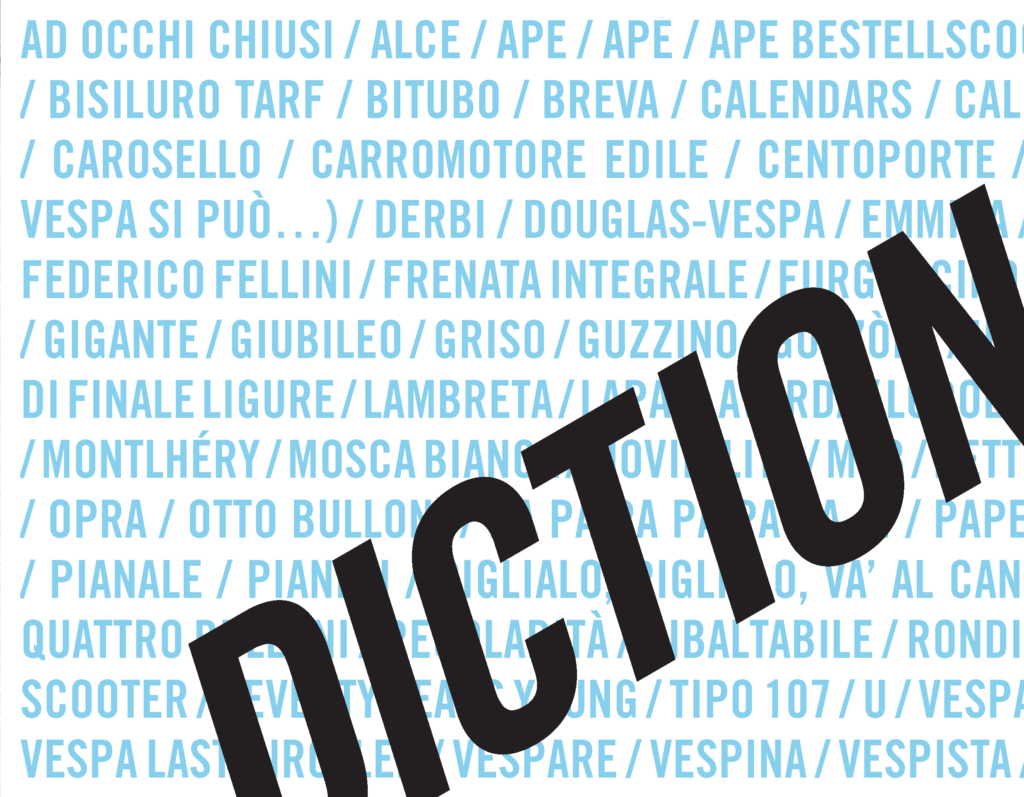 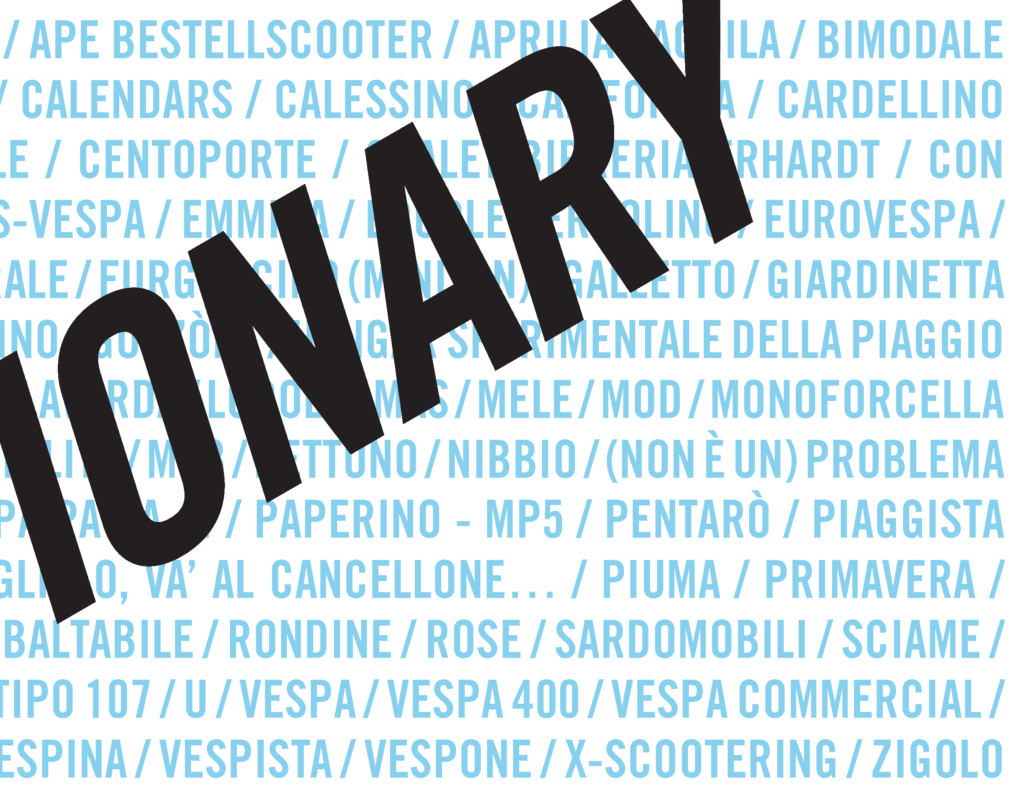 Needless to say, there’s a great deal more to be ogled, palped, and read. And, yes, there’s a manifesto: the FuturPiaggio MOVABILITY manifesto is also enclosed within the black box.

Ordering information is available on the Rizzoli website at http://www.rizzoliusa.com/book.php?isbn=9780847859214.