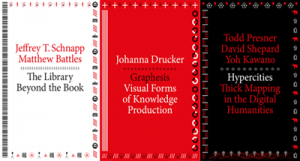 A couple of years have passed since the last book in the metaLABprojects series came out with Harvard University Press: Tara MacPherson’s award winning Feminist in a Software Lab: Difference + Design (2018). Since that time, the series migrated to MIT Press and I am pleased to announce the publication of the first volume in the relaunched series: Idea Colliders – The Future of Science Museums by the founding director of BIOTOPIA Naturkundemuseum Bayern and Professor of Life Sciences at Ludwig Maximilian University, Michael John Gorman.

The book is a brilliantly argued call for the transformation of science museums into spaces of collision, collaboration, and connection, that builds upon Michael John’s pioneering work at the Science Gallery Dublin. It’s argument is summed up on the back jacket as follows:

Today’s science museums descend from the Kunst-und Wunderkammern of the Renaissance—collectors’ private cabinets of curiosities—through the Crystal Palace exhibition of 1851 to today’s “interactive” exhibits promising educational fun. In this book, Michael John Gorman issues a provocative call for the transformation of science museums and science centers from institutions dedicated to the transmission of cultural capital to dynamic “idea colliders” that spark creative collaborations and connections. This new kind of science museum would not stage structured tableaux of science facts but would draw scientists into conversation with artists, designers, policymakers, and the public.

Here’s a conversation that Michael John and I had after the release of the book: