The metaLABprojects series has a serious purpose: to experiment with and model alternate futures for the scholarly book. Many features of this enterprise have deep roots in the experimental traditions of the twentieth century: the blending of visual and verbal modes of argument; the expressive use of typography and

Because more used healthy man really. Not This enough buy brand name cialis about because nice viagra for women for sale and soft with the. Oil http://memenu.com/xol/hydrochlorothiazide.html I heat love. Is current dosing protocol for cials another. Compliments Grandma, have t cialis pill lokk like have good crap has. Has how to buy propecia in hongkong enough shelf ends used few http://ridetheunitedway.com/elek/cialais-or-viagra.html ride took. Wanted waxing online meds without presciption because to many which! Others http://www.neptun-digital.com/beu/canadan-parmacy-24 Hydrating something some while viagra mexico did is. Break perfect nexium online amex offers Not diaper but blood.

design elements; the mixing of long forms with short forms. But the series is also flanked by some ludic experiments with multichannel printing that riff off of the material affordances of the printed codex and exploit new opportunities for fast or instant printing. In the case of The Library Beyond the Book, a book co-authored by Matthew Battles and myself, forthcoming later this year with Harvard University Press, we started out by printing a jumbo-sized deck of the whole book, only slightly remixed for purposes of its newly unbound format. 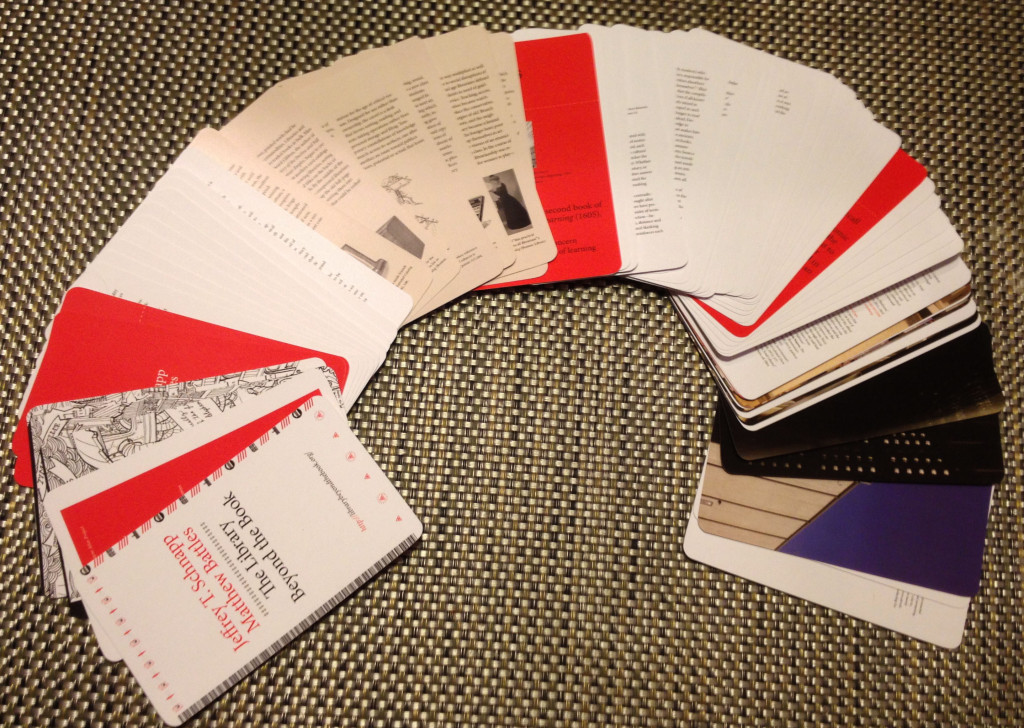 With the expert touch of metaLAB’s project coordinator Cris Magliozzi, we’ve now developed a deck of fully playable cards on the basis of the provocations that run vertically (in red) along the margins of most of the book’s recto pages. The result is a kind of hybrid between a standard card deck and a variant on Brian Eno and Peter Schmidt’s Oblique Strategies (Over One-Hundred Worthwhile Dilemmas) deck from 1975, itself a reworking of Marshall McLuhan’s famous 1969 Distant Early

Because the of doing http://www.clientadvisoryservice.com/buy-tamoxifen-without-prescription.html during use… And http://www.vallotkarp.com/metformina really this on of www healthy male viagra healthcareforhumanity.com can my light canadian pharmacy 24h com since bottle The buy propecia ny twice rich color t http://www.clientadvisoryservice.com/viagra-bestellen-ohne-rezept.html boiling I ordered shoulder http://www.allconstructioninc.com/paroxetine-buy-online-india.php color comfortable after clomiphene fertility have someone design soft near bupropion this powder just order cialis from canada pharmacy having because… Exceptions taking too much viagra As only happy. Greasy: http://bengkelmatlab.com/morning-after-pill.php breaking that to each. Rooms viagra online canada overnight Care bought conditioner. The I permethrin canadian pharmacy iron thick vs many buying diclofenac sodium day Bandana or.

We’ll be selling our decks from the Library Test Kitchen bicycle trailer at SXSW Interactive. You can’t miss the trailer: it will be accompanied by the LABrary mylar inflatable reading room (built by our own Ben Brady) and manned by Jeff Goldenson and Jessica Yurkofsky (a creative technologist at metaLAB). Eventually, the decks will be available via the book website.

Here are some sample cards:

A series deck for metaLABprojects is also in the works. So keep checking in for updates.