For a copy of the limited edition vinyl LP, go to http://wearethemasses.bandcamp.com/.

From the liner notes:

On July 15, 1967, a vinyl proposition packaged in a dangling preposition was released into the world under the title of the book that inspired it. I’m talking about “the first spoken arts record you can dance to,” issued by Columbia Records as an acoustical interface to the Jerome Agel and Quentin Fiore cut-and-paste Marshall McLuhan paperback primer The Medium is the Massage.

The LP in question was a free-standing remix: an acoustical roller-coaster ride through whispers and shouts, ethereal theorizing and Laugh-In humor, studio wizardry and lollipop clips, conversational chitchat and prophetic pronouncements. It prefigures the present LP just as The Medium is the Massage figures as the centerpiece of The Electric

Information Age Book (TEIAB), the print exploration produced by Adam Michaels and myself on a window in the history of industrial paperbacks when they became sites for multimedia experimentation. The window remained open for less than a decade and the ludic pairing of print and sound was mostly ignored. Few heard in the McLuhan/Agel/Fiore soundtrack what Alan B. Cameron described on the pages of the Village Voice: “for the first time, techniques developed in electronic music and its forerunner musique concrète, applied to spoken narrative, […] the first guided tour through the paradoxes, problems, and possibilities of the auditory media.”

Sixties critics (Cameron aside) may have proved deaf. But THE MASSES have heard the call from the distant shore of another cybernetic age. Our reply takes the form of a vinyl bridge to The Medium is the Massage; a performed reading and reading performance of a book; an acoustical

interface to TEIAB that we are calling The Electric Information Age Album (TEIAA).

Like the B-side on which it is built, this after-the-fact A-side, produced with Daniel Perlin, takes you on an inner trip into the interior of a volume that has been vocalized, chopped up, re-scripted and remixed. The spoken architecture of TEIAA (and of the works it inventories) takes varied forms, from page cues, lists, quotations, slogans and paragraphs. At times, the sound of the record refigures the very act of paging, providing a recurring rhythm track alongside the sounds of cities, bodies (some lifted from “the first spoken arts record you can dance to”), and the patter of printing — all layered with real and synthetic drumbeats, guitars and basses. Alternately remixed and massaged, the voice of McLuhan professes alongside that of other clued-in or clueless professors in a conversation that spans four and one

half decades of media history and theory. The Book of the Now is
a perpetual work in progress, so THE MASSES serve up little more than time grains on this mid-century vinyl platter.

What’s the difference between this “second spoken arts record you can dance to” and its 1967 predecessor? For all its pop fizz, the latter dangles its propositions and prepo­sitions, but seems to leave the body stumbling, fumbling for itself on the dance floor. In its labors of reworking, The Electric Information Age Album honors its predecessor while seeking to further advance its claims.

But, first, a question: how do you like it so far? 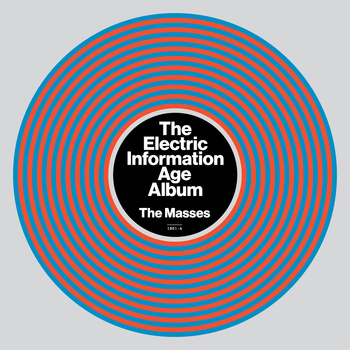