is devoting its first summer to an array of projects including the development of extraMUROS and the Augmented Harvard, but not without some entertaining detours, like The Oracle, built by our own Joseph Bergen with help from the whole group. The piece was developed for the Berkman Center Hyper-Public conference, held on June 10, and conjugated digital messages with physical remains. Using an algorithm that browsed conference participants’ Twitter archives for personal tweets, it

exposed them both as projections and as receipts, accompanied by QR codes, printed on thermal paper by our indomitable ORACLE. Audience members were invited to read, gather, and circulated these fragments of an elusive narrative. By the end of the day, the Tweet stream was so active that The Oracle went into overdrive, spewing out uninterrupted trails of message traffic. To be repeated, perhaps at ACL(x) at Penn State in the fall. 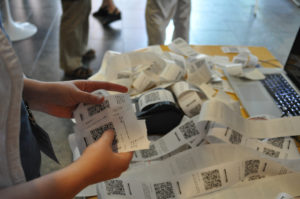