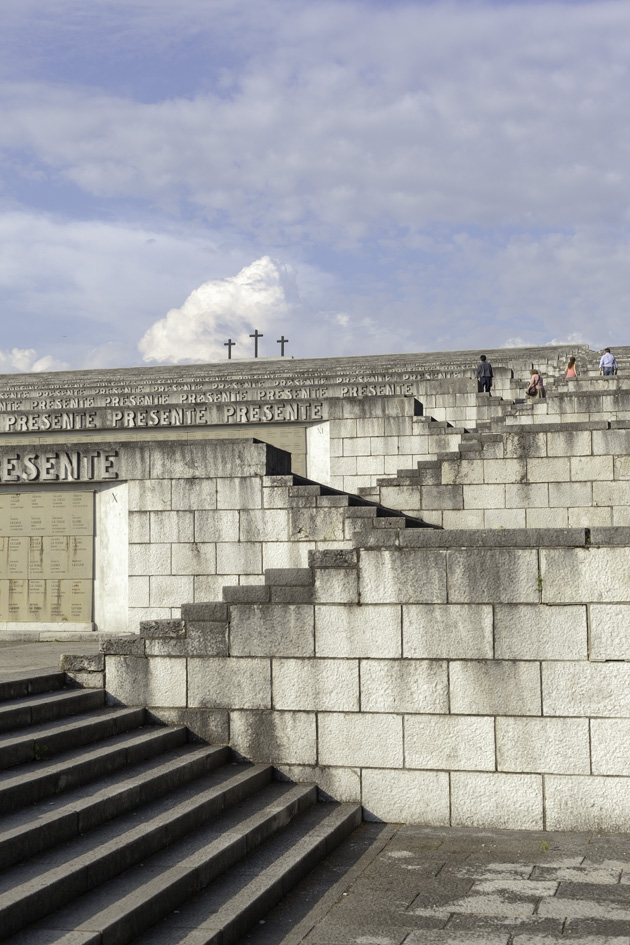 Two years back, I was approached by the Germanist Wolfgang Straub and the photographer Peter Köllerer who were working on a book on the 33 Fascist-era ossuaries and sacraria that were erected by Mussolini’s regime along the front between Austria and Italy to house the remains of Italian World War I soldiers. Elegantly produced, the book came out in late 2020 with the Viennese publishing house Sonderzahl and contains over one-hundred splendid color photographs of these haunted architectures of mass death. I contributed a preface from which I have excerpted the following passage:

The great fascist ossuaries of Northern Italy and the Alto Adige, also known as sacrari (or places for the keeping of sacred relics), so splendidly documented in the present volume, secularize and nationalize their historical predecessors even as they restructure the imaginative underpinnings of the ossuary qua bridge between the living and the dead. Unlike their predecessors, their scope is specialized: restricted to a single category of fellow citizens—Italian soldiers felled on the Alpine battlefronts of the Great War, the so-called “martyrs” of the Fatherland. Unlike their predecessors, they are committed to preserving the individuality and somatic integrity of the dead. There’s no promiscuous comingling of bodies or body parts; no loss of the boundary line between self and other; no ghoulish exposure or danse macabre of heaped-up skulls, rib cages, arm or leg bones. Rather, their architectures bring the dead back to life with the cool precision of a clinic: as an orderly assembly, an inventory of names, a filing system of bodily remains. Instead of threatening or haunting, they seek to consolidate a myth: the myth that this community lives on—indeed, marches on—in the nation state being shaped by Mussolini some two to three decades later. Designed to mark “Italy’s enduring gratitude to its Dead,” the fascist ossari aspire to serve as a “virile school for the living.”

This emphasis upon discipline and composure in the face of death is everywhere on display in Köllerer’s photographs. The essay concludes picking up again on the theme of the marching/living dead:

Such is the entangled genealogy that shapes the architecture of Italy’s 1930’s ossuaries; monumental complexes in which, just as the early fascist “martyrs” were kept alive by means of ritual forms of retrieval and revival, so now the fallen of World War I are enrolled in the triumphal march towards Mussolini’s Third Rome.

In the fascist imagination the passage from rally to march to battle to burial is understood as no less natural than the inverse movement from burial to battle to march to rally. However estranged from contemporary history, the ossuaries captivate because they are the relics of this dreamed-of (and calamitous) reversibility.

The book is available for sale from the publisher at https://sonderzahl.at/buch/presente/.

Here are some sample photographs: