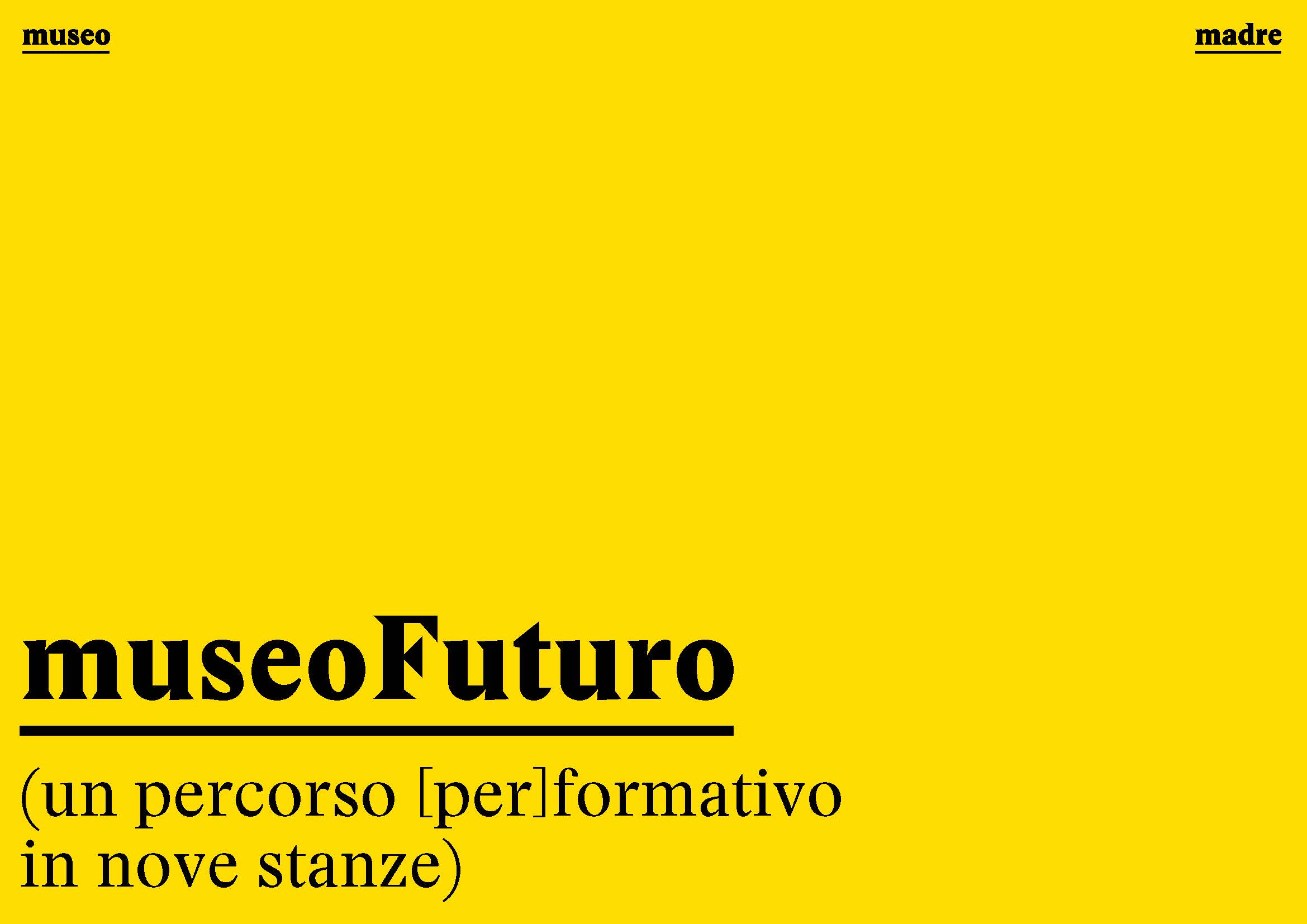 This January 15, 2021, with my collaborators Daniele Ledda (xycomm Milan) and Elisabetta Terragni (CUNY, Studio Terragni Architetti, Como), and working with the team at the Museo Madre // Fondazione Donnaregina in Naples, I launched a novel initiative entitled museoFuturo.

MuseoFuturo (“Future Museum”) is an experiment in museum-based education that reaches out not to museum professionals but rather to young practitioners in a range of creative and technical fields, inviting them to participate in the development of nine alternate visions of the future museum, while bringing the Madre’s own permanent collection –which, as is the case in most art museums, is mostly in storage– into public conversation.

Free of charge, museoFuturo is envisaged not only as a form of museological experimentation in line with the work contemporary artists such as Marcel Broodthaers (Department des Aigles) and Fred Wilson (Mining the Museum) but also as a training ground for future museological professions: a training ground that weds formation (in the sense of Bildung and Forschung) with the performative (learning by making, in the pursuit of impact, connections, site-specific visibility). After ten studio/seminar meetings followed by ten exercises in curatorial making, the program will conclude in September 2021 with a marathon event: a day during the course of which a catalogue will be collaboratively produced by the group –the catalogomaratona— and express printed. A copy will be passed along to all successful participants along with a Certificate in Experimental Museology. An exhibition, made up of nine nodes distributed within the Madre’s architecturally complex exhibition spaces, will translate the strongest of the collectively elaborated curatorial interventions into a innovative experience for museum visitors this coming fall.

Close to 700 applications to participate were received: many from Italians scattered across Europe and the Americas. Twenty five participants were chosen, ranging from sound artists to cultural managers to archeologists. The aim is to create a laboratory space in which a series of nine concepts of the future museum are not only explored but also instanced by means of curatorial interventions developed in small groups working with 18 objects from the Madre’s collections. The final unit of the experiment will involve work with the collections of a partner institution: the National Archeological Museum of Naples. 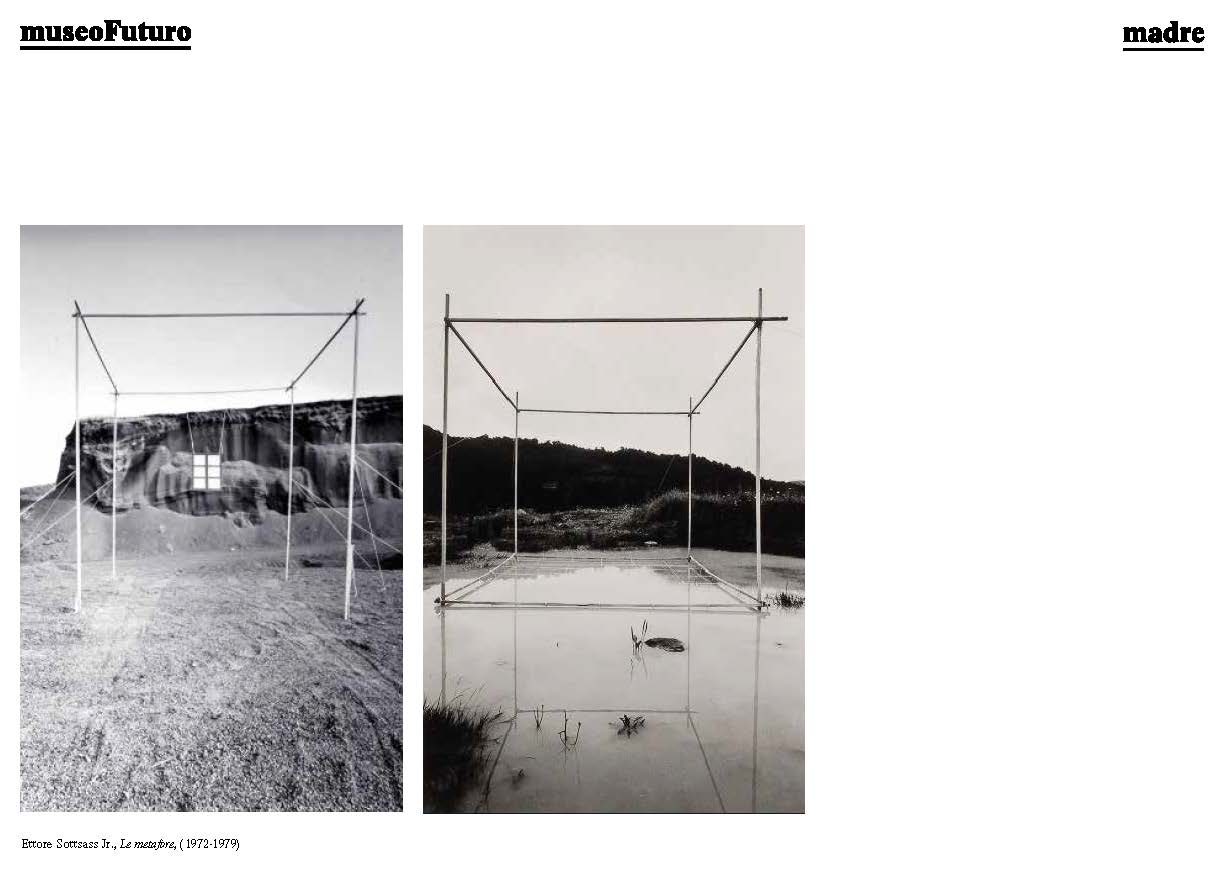 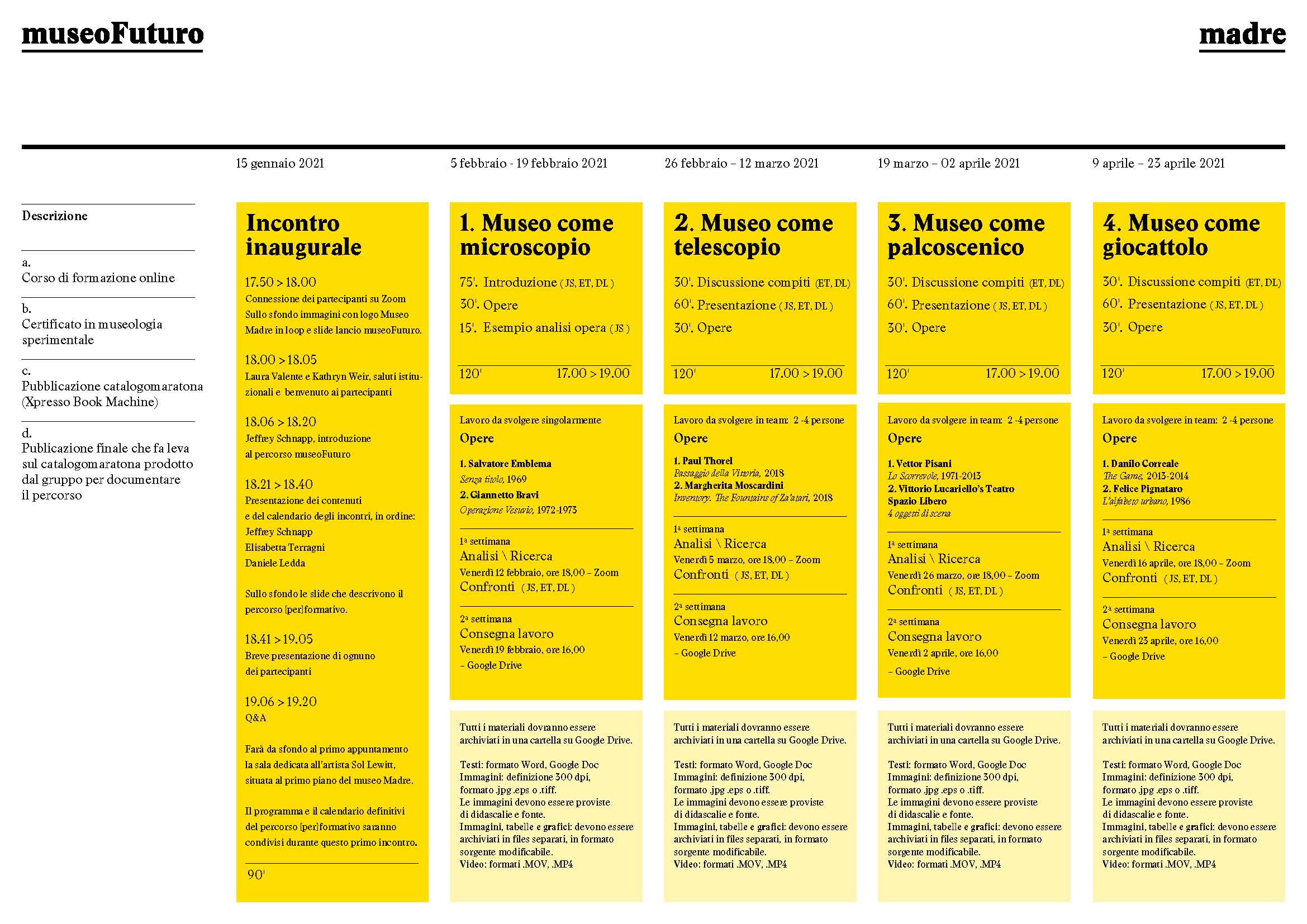 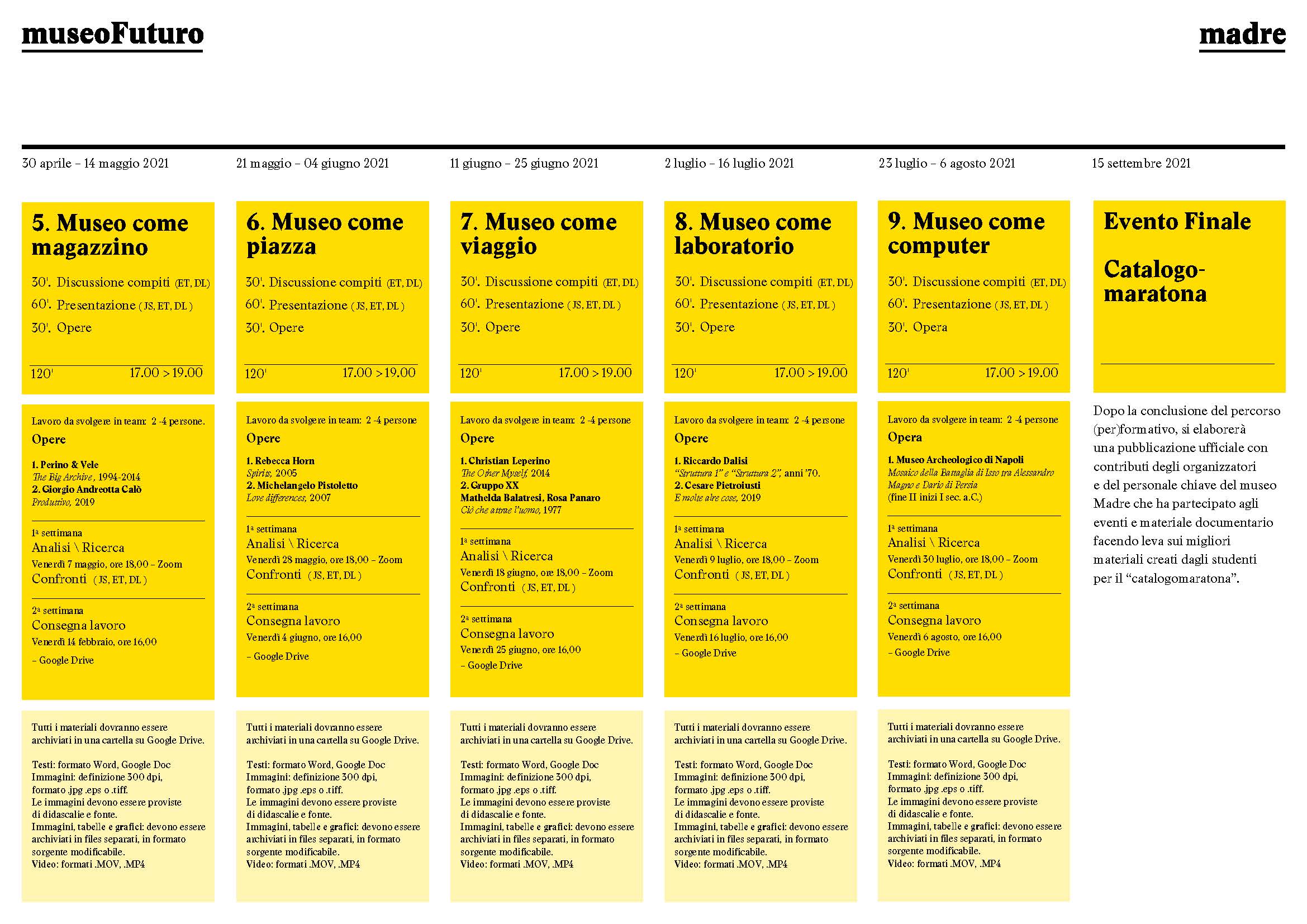 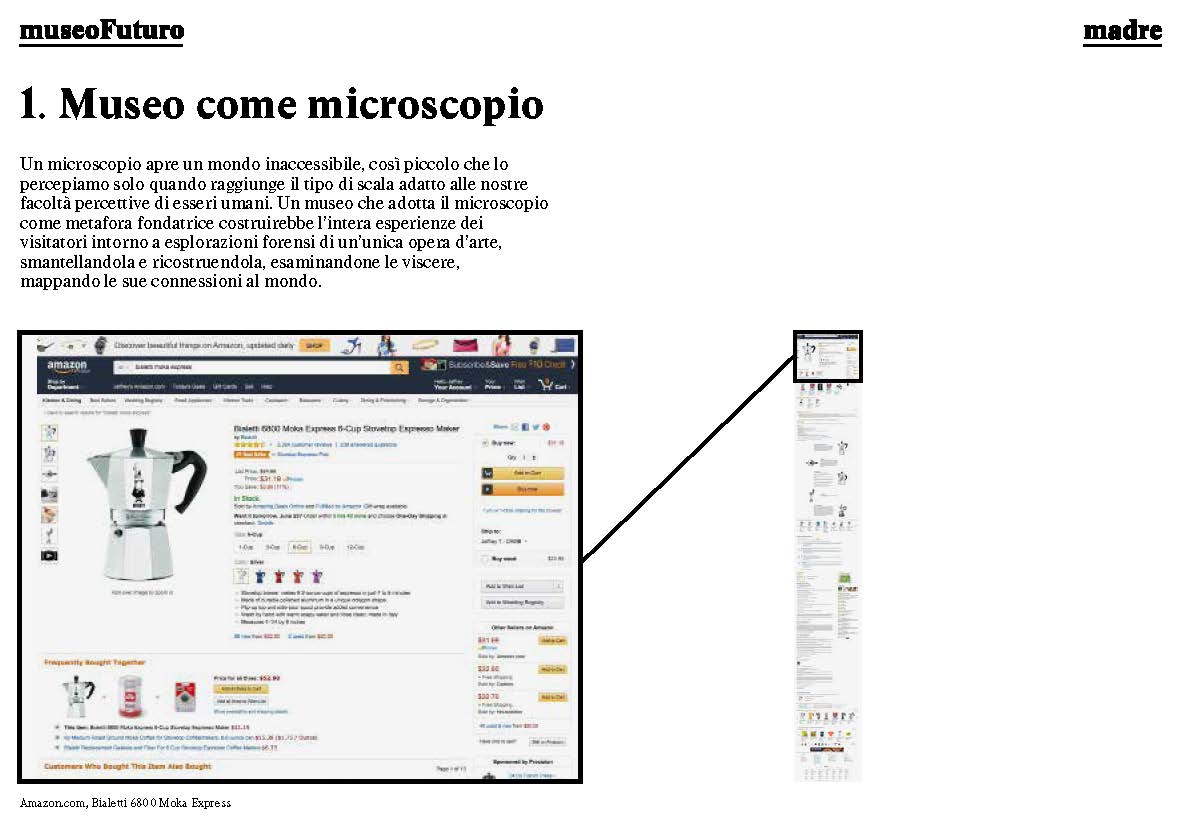 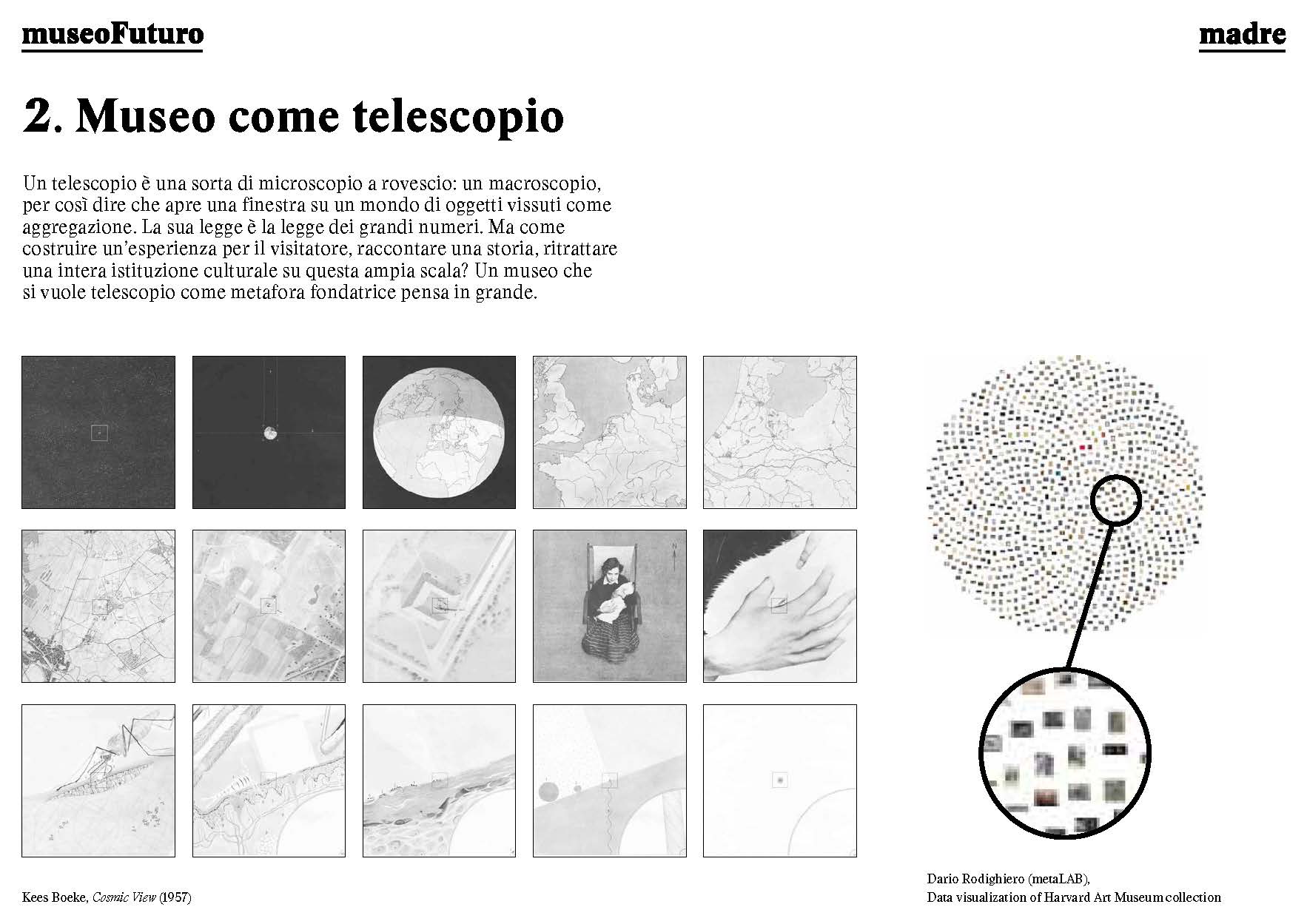 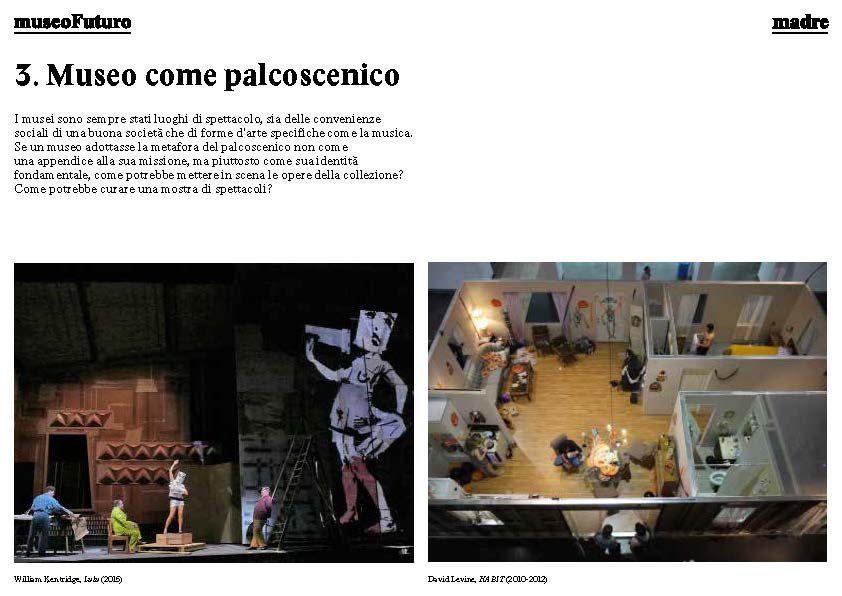 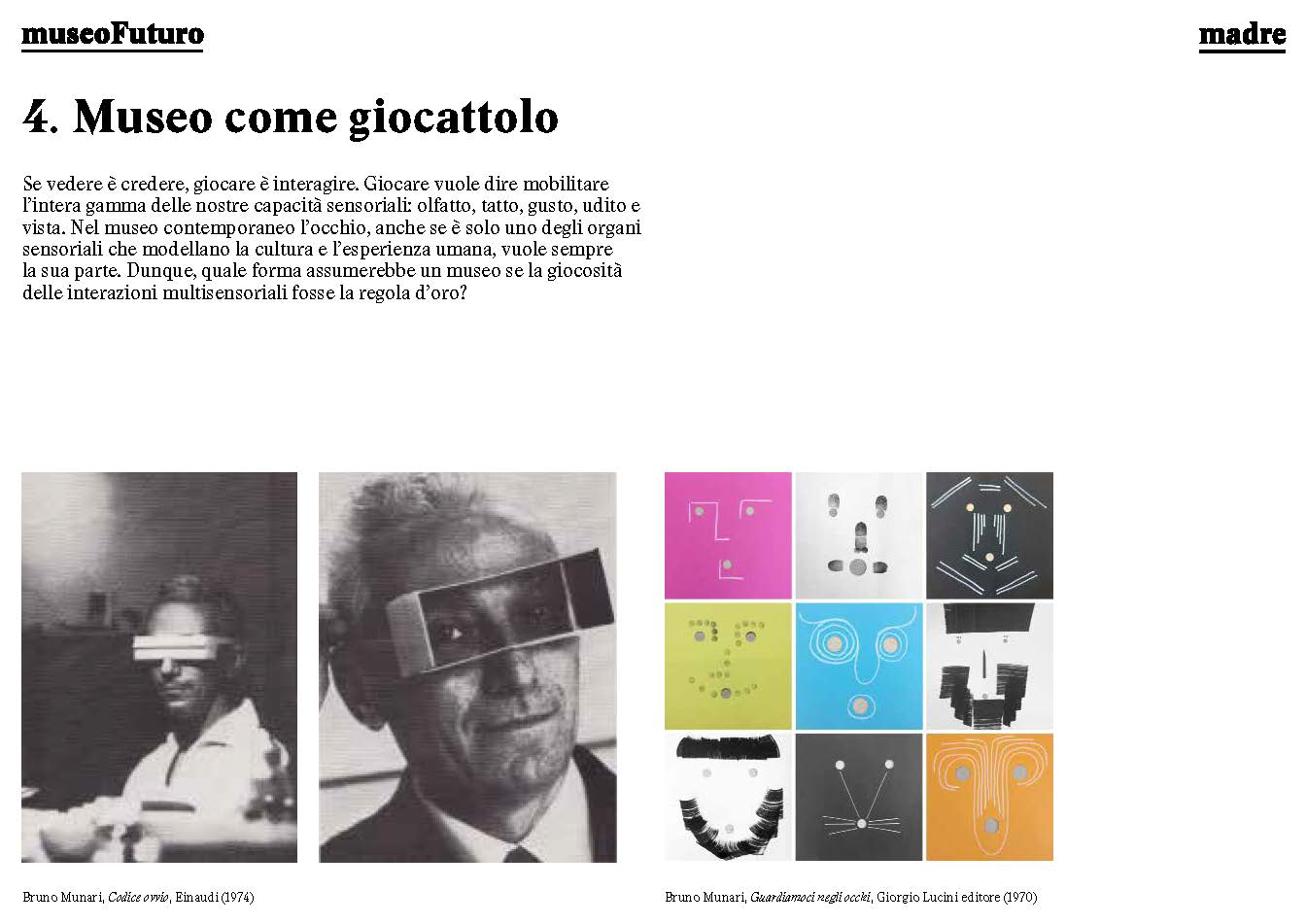 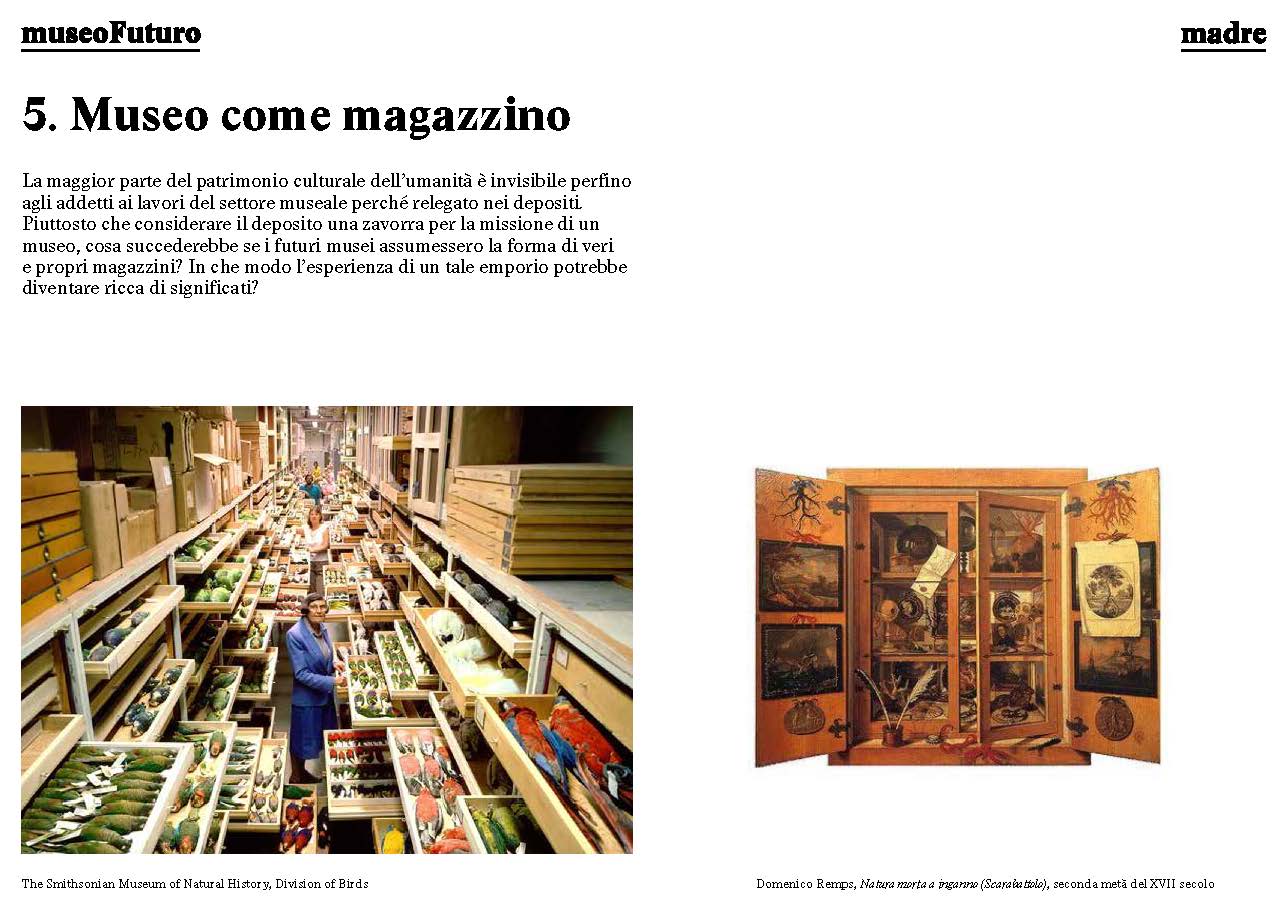 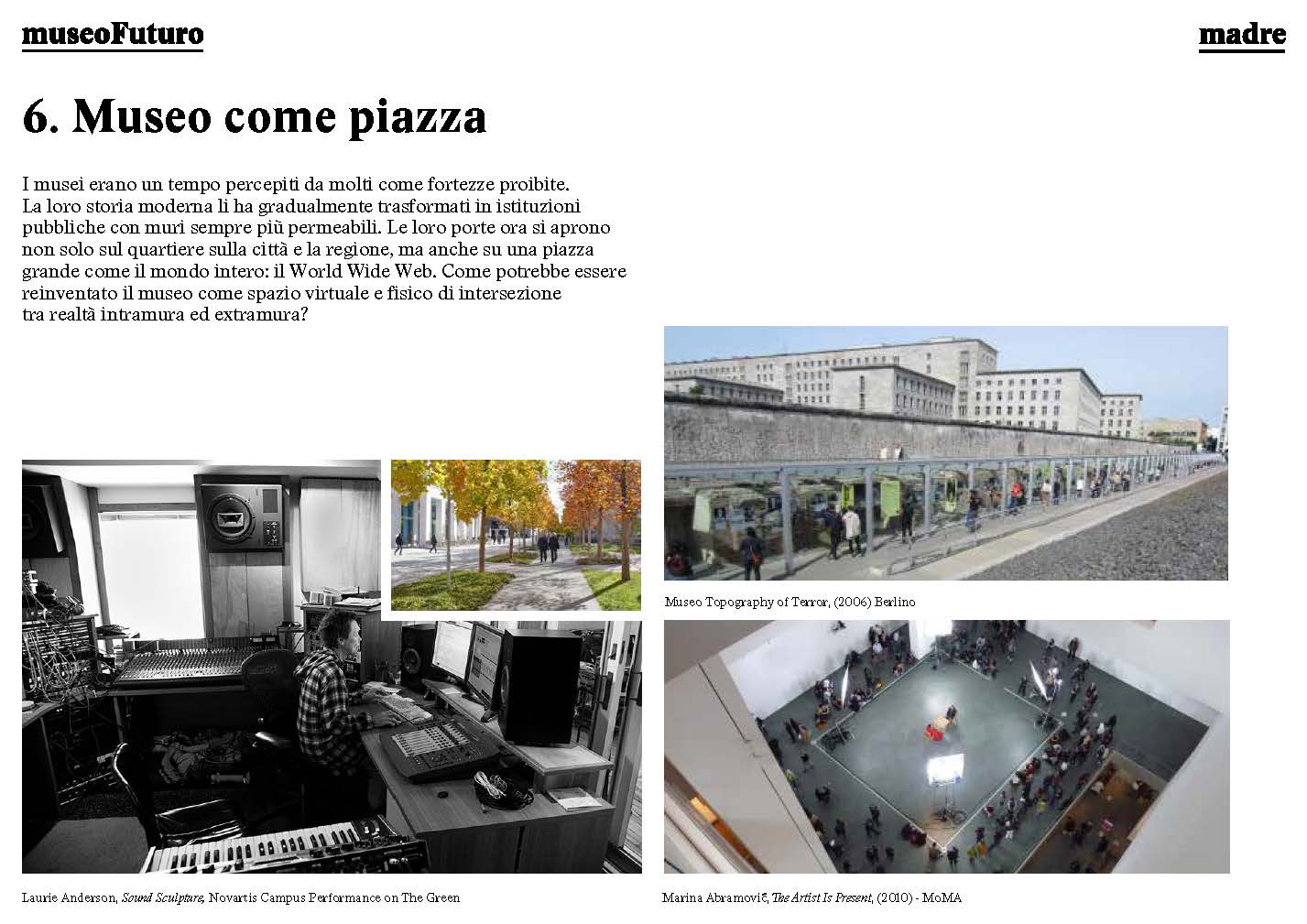 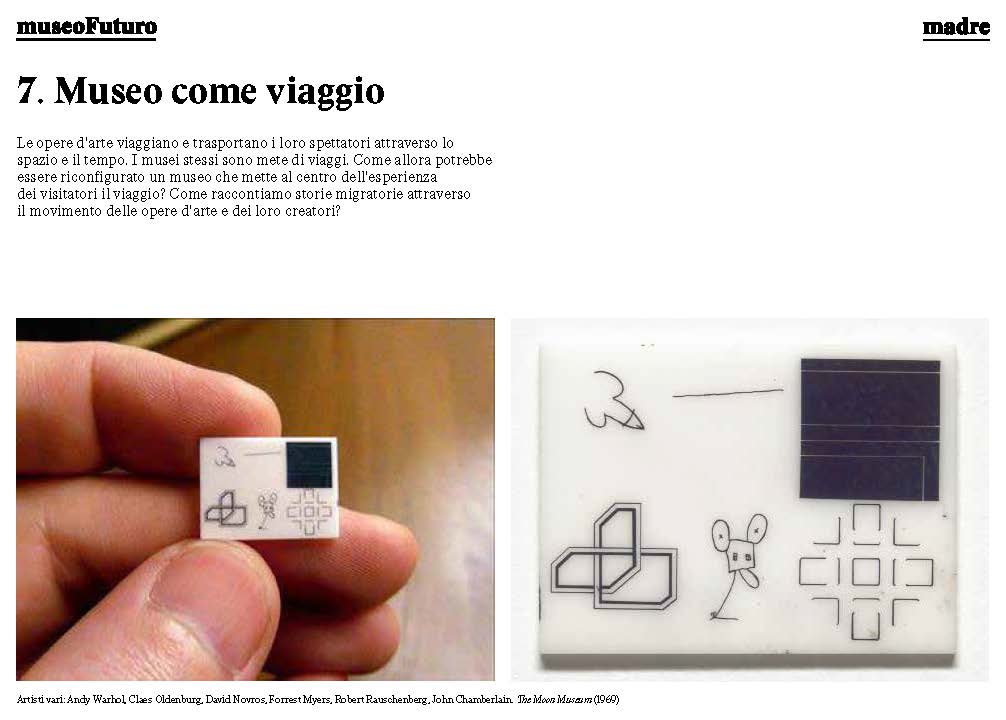 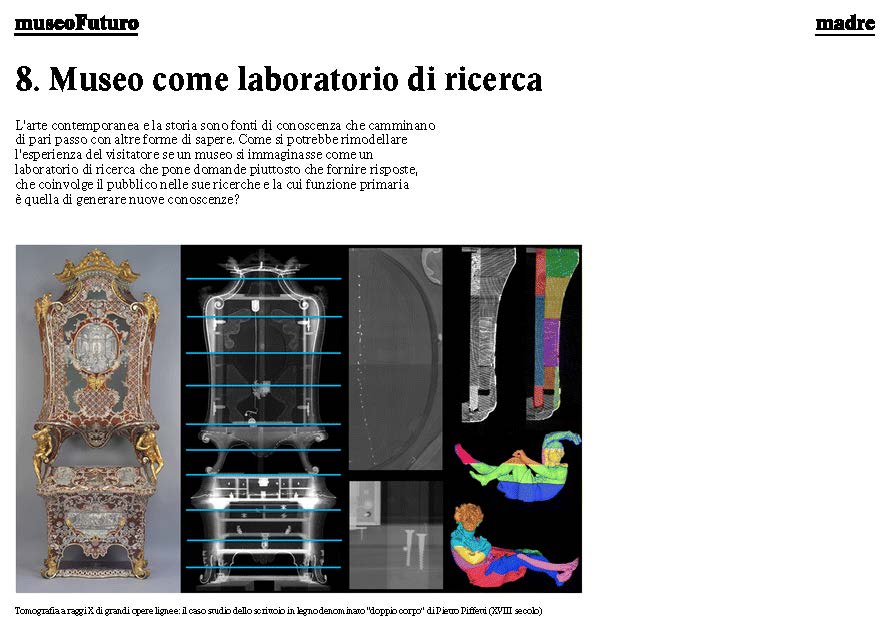 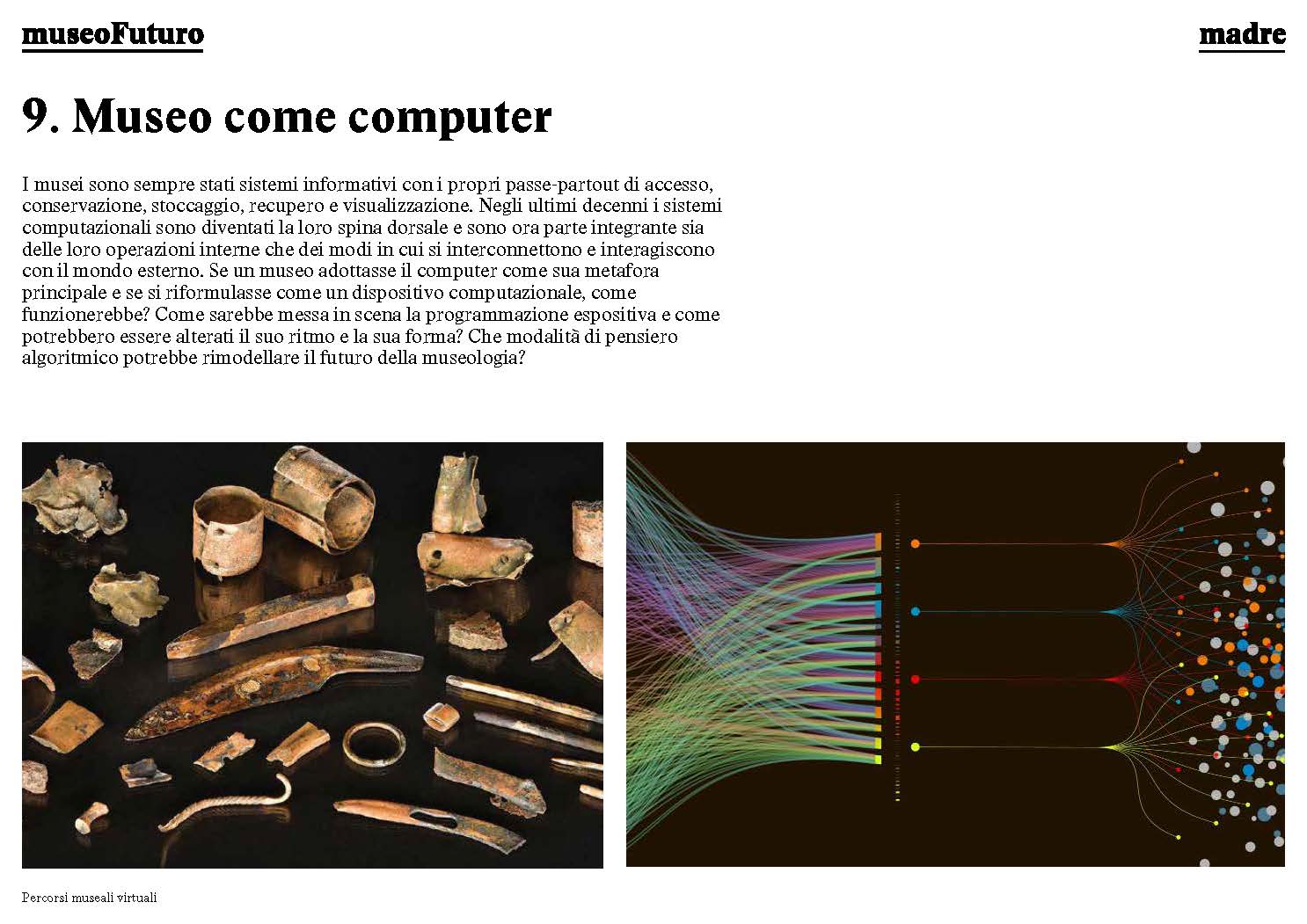 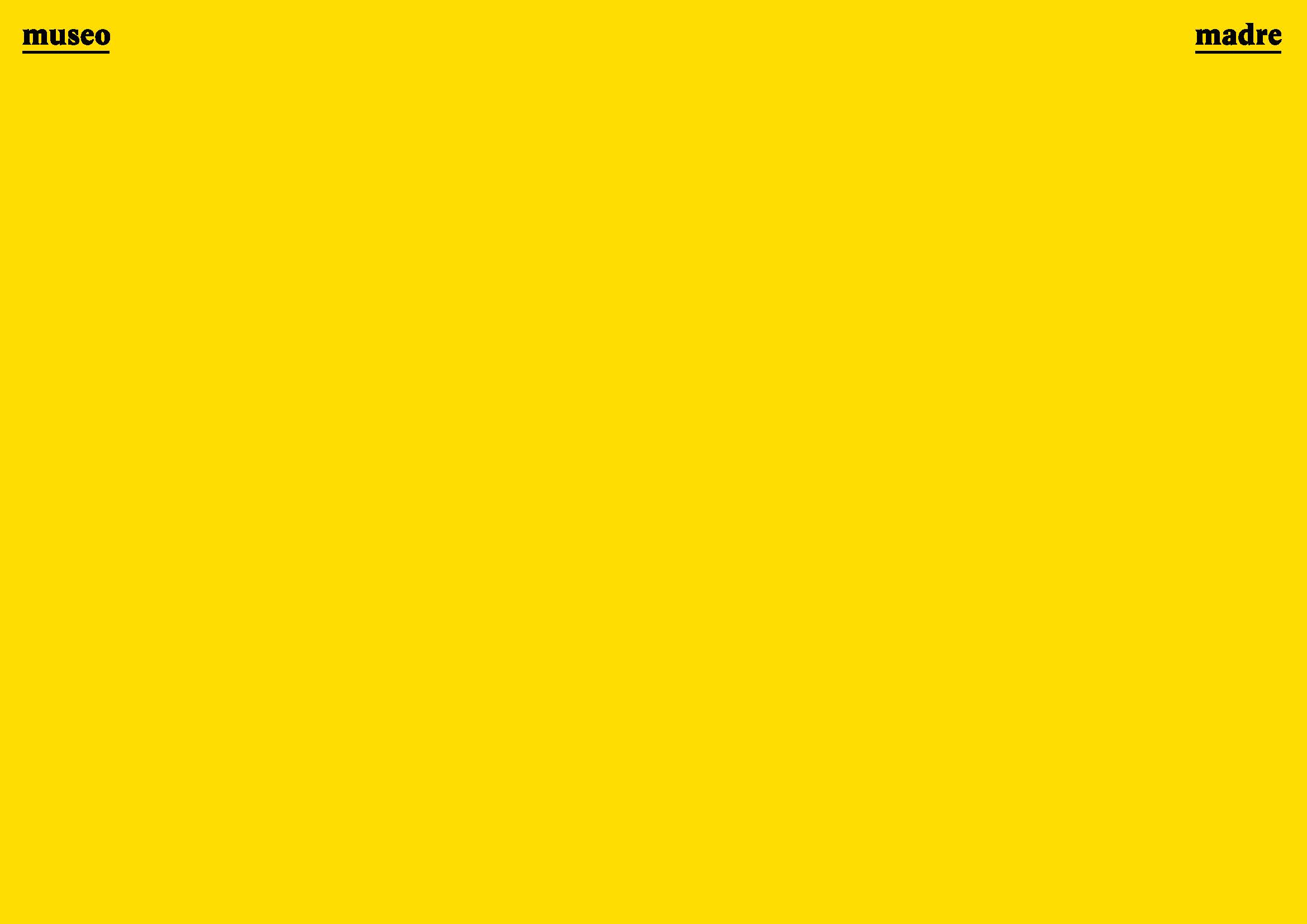