Isaac Asimov’s 1950 classic I, Robot is remembered for many things, but especially for its formulation of the “Three Laws of Robotics”  (sometimes referred to as “Asimov’s Laws”). They run as follows:


Asimov felt free to modify these “laws” in subsequent writings. Others did the same, re-writing them in the service of other ethical norms or standards of social responsibility. Whether in their initial form, or with additions or variants, they have endured and continued to shape the conversation regarding human-robot interaction.

The leadership team at Piaggio Fast Forward found itself thinking quite a bit about Asimov’s Laws as it set about developing Gita. Like its big brother Kilo, Gita is a functional and fun cargo droid designed to enable its human operator to move more, better, further, faster, more pleasurably, and more efficiently. It operates both indoors and outdoors, in either the “follow me” or autonomous mode. Whether you are a pedestrian lugging bags of groceries around the block; an office worker jogging to work; a delivery person transporting goods; or a utility worker who needs their hands to be free to perform useful tasks while trailing an intelligent toolbox, Gita is your movability helper, letting you walk or run instead of forcing you to drive.

Through vehicles like Gita, PFF promotes walkable, livable, and vibrant communities filled with enhanced transportation options that enrich the lives of everyone. It’s what my colleague Greg Lynn and I like to call granular urbanism: urbanism approached not on the scale of large structures and systems, but instead on the fine-grained, local scale of human locomotion, last mile deliveries, and everyday tasks that make up the fabric of everyday life.

It’s crucial to remember that the key thoroughfares for new vehicles types like Gita are likely to be sidewalks. And sidewalks are at once civic spaces and highways devoted to pedestrian use, built in harmony with human scales of motion, interaction, need, and use. So to envisage a future in which humans and robotic vehicles happily and productively co-exist in the public and private realms of the 21st century city means to think hard and long about how and why humans would decide to share their sidewalks with smart, networked, robotic agents. It’s not just a question of the potential harm that the latter could inflict, but also of the benefits that they could confer, particularly to portions of the population, like the disabled and the elderly, that have been poorly served.

It was within this framework that we set about drafting our own version of the Three Laws, informed by PFF’s human-centric approach to the design of robots. 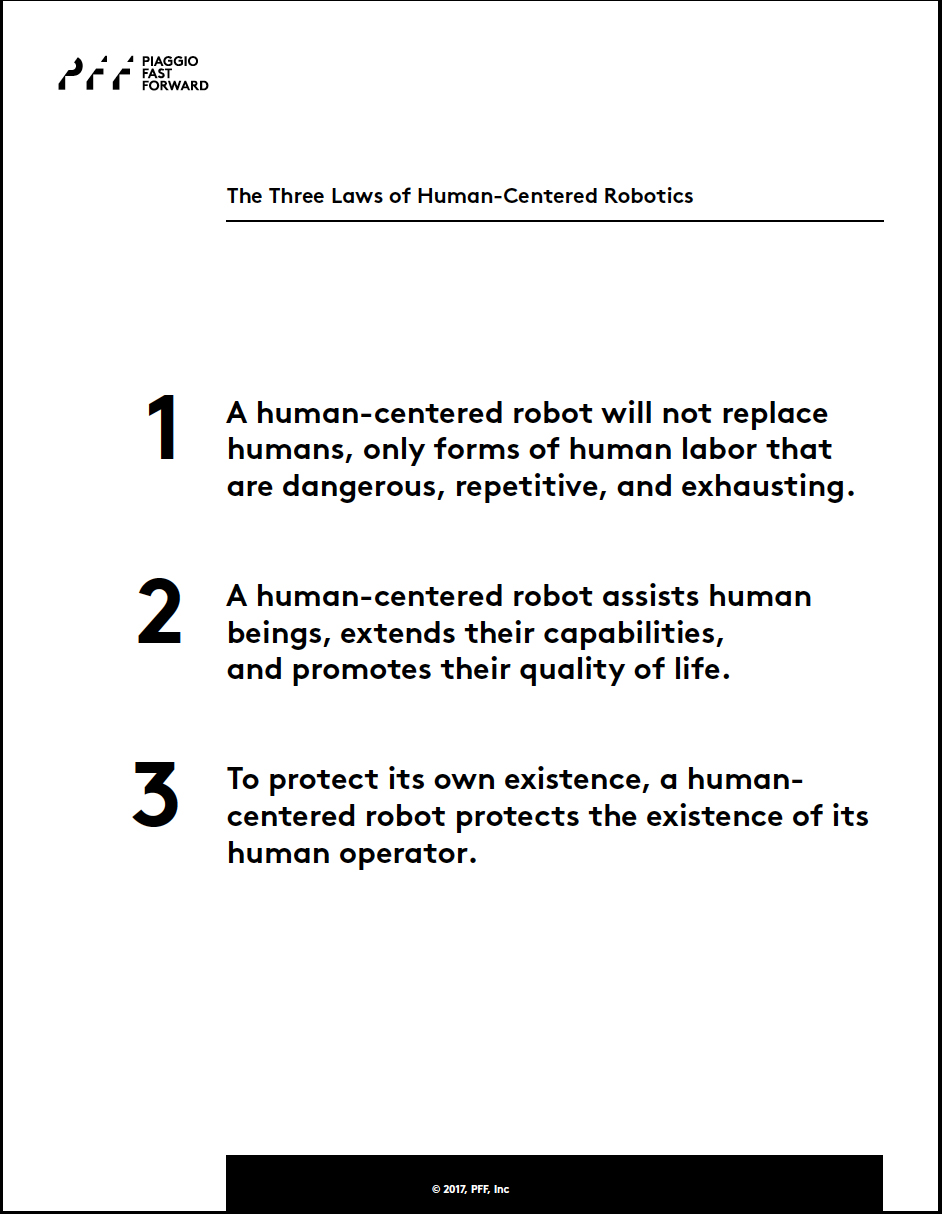