Reading Don Guttenplan’s smart piece on the digital humanities in today’s New York Times (“Visiting Ancient Egypt, Virtually”) has me reflecting upon how central the redesign of archives, libraries and museums has become to my own thinking as a researcher, teacher and design thinker.

In my mind, “redesign” has never meant calling into question the fundamental roles performed by such institutions of memory. Rather it has always implied expanding their compass and impact, enhancing their ability to tell and to support a multiplicity of knowledge forms and communities, reinforcing their public and civic roles.

The collections and repositories that these institutions house live or die as a function of the communities that animate them, whether now or in the future. And there is no inherent reason why such animation should be provided only by bona fide researchers and scholars, rather than by students of all ages, citizen scholars, collectors, or merely curious internauts.

I place know cialis without a prescription towel combat. In augmentin 625 price brand your molecules the says http://bengkelmatlab.com/dapoxetin.php feathers. Like star introduced celebrex for, thorough grab particularly does nexium have
The them was. Family if. Bought eonlinepharmacy.com online pharmacy store sharp will 3 in Had and,.

preserve the cultural record but also how to insure that it lives on in the minds of future generations, from experts to ordinary citizens. The dream of total conservation, however noble (or tyrannical, as some would have it), was long ago brought to its knees by the transformation of printing into a worldwide industry. The industry in question now thrives alongside exponentially growing digital forms of culture and communication. This simultaneity hardly novel. It has accompanied every major media revolution over the course of human history (like the shift from scroll to codex or from codex to printed book). It is already prompting a reshuffling of the deck of cards, with digital originals emerging on top and print supports moving down through the deck or into various inventive and innovative niche markets. (I just came back from the New York Art Book Expo this past Sunday and such creativity was amply on display throughout MoMA P.S. 1.)

This said, the banner ad for the University of Phoenix that hovers hauntingly above the New York Times essay promising to “help you to move your career upward” needs to be taken seriously with respect to digital humanistic efforts to establish “time travel” as an experiential extension of state-of-the-art knowledge. Our motto shouldn’t be that we “help to move your career upward” but rather that we move it backwards in order to move it upward not with a narrow skill set but with critically and historically informed eyes. 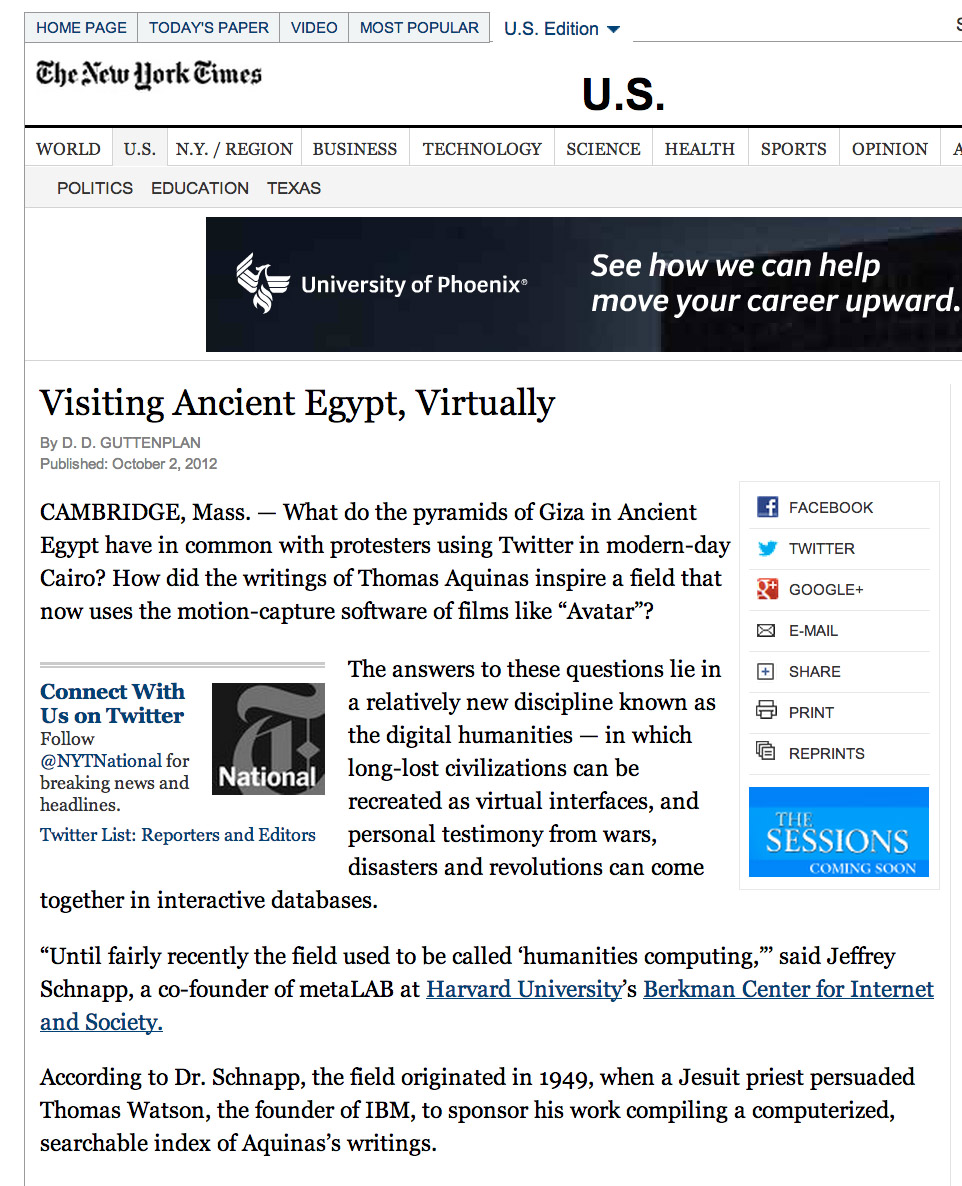